‘How do you fancy photographing an oil rig in the middle of the ocean in Africa?’  my agent’s asked me over the telephone.  ‘Equatorial Guinea, there’s a US company that’s found a ton of oil there’.

So here I am 20 years later staring at the images of my first ever oil assignment that was in Equatorial Guinea on my lightbox.  It was film back then, remember?   Pretty much the only traveling I’m doing since Covid 19 ruined our lives almost exactly I year ago is going through those thousands of slides taken during the pre-digital era.  A task I was dreading but am actually enjoying.

I love an adventure and this was so exciting!  I once went on an oil rig in Egypt whilst living there for an editorial assignment but nothing like this.  I would be helicoptered out to the rig from Malabo where the headquarters were and would be able to shoot from the chopper before landing on the rig. 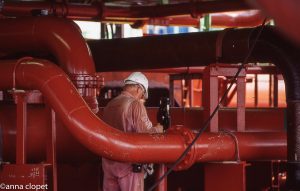 Worker on rig in EG[/caption]

Not many people had heard of Equatorial Guinea back then and getting there was not so simple. From Paris I was scheduled to fly to Douala and change planes but the flight was cancelled.  I ended up taking a night flight to Libreville with a long layover in their grotty departure lounge.

Malabo airport was tiny and the main road to town bumpy and in poor condition.  There weren’t many places to stay at the time and the Impala hotel was rather run down like the rest of Malabo but the dilapidated remains of old colonial buildings built by the Spanish gave the city some charm.

For 2 days I was helicoptered out to the rigs and discovered what an FPSO was.   The whole process was explained to me as were safety instructions.  I learnt a whole new vocabulary.  I was helicoptered from rig to rig with the door open attached to a monkey strap with a 2 way radio to the pilot I was on a high taking pictures of the rigs and FPSO in an azure ocean. I spent a night on a supply vessel in order to take pictures at sunset .  As a photographer who had done a great deal of industrial work in all sorts of hangers and factories, this was much more fun! 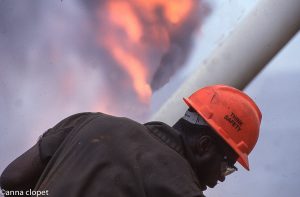 I had taken several cameras with me including a Hasselblad panoramic camera.  It turned out to be a great addition.  My agent had warned me against bringing too much equipment and that lighting would not be necessary on this particular assignment.

The fourth day we went to the Presidential palace which was an eye opener, the CEO of the company I had gone out for had a meeting with the President of EG, a big event that I had to photograph.  Nothing dilapidated here, a huge modern well-built compound on a hillside overlooking the ocean.  It was at the time the only area of modernity that existed.  There were several large villas surrounding the palace and it was very well guarded. 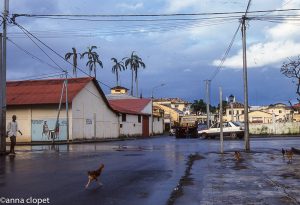 I wanted to take photos of the town so walked around the street.  The beautiful colonial buildings were in a terrible state of disrepair, crumbling with roots and trees growing out of them which I hope have been restored today to their former glory.  Everywhere there were trees full of birds and I could almost feel the forest encroaching on the town.  Outside the hotel in Malabo young boys stood outside trying to sell the only thing that I saw for sale, giant spiders mounted in glass frames.  When I jokingly told one of them that they weren’t big enough, he said ‘no problem they’re everywhere and I can find you a really huge one’   I have a spider phobia, so I’m sorry to say that I never darkened the doors of those enticing ruins and checked my room every night before going to bed!  As much as I like taking back something from the countries I visit, no, I did not purchase one.

The Malabo of today looks quite different.  There are modern hotels, a proper airport and better paved roads.  It remains however poor, and although the President and his son have squandered billions buying properties overseas and an extravagant collection of expensive cars, a lot of the population of Equatorial Guinea have no running water or electricity and infant mortality remains extremely high.  What a shame.